The skill of dribbling the ball is one of the most important factors in the sport of soccer. Dribbling is how soccer players transition the ball from one end of the field to another, weave in and out of the defense, and have a chance at scoring a goal. Speed, balance, endurance, agility, and body control are essential factors in making a soccer player successful in dribbling. Soccer dribbling requires players to have great footwork, control over the ball at all times, and the ability to quickly change directions. The idea is for a soccer player’s dribbling skills to become second nature, so when the time arises they naturally perform the necessary move for that particular situation. 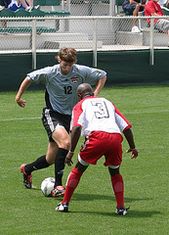 Most soccer players utilize the cut to move the soccer ball to the side when coming face to face with an opposing player, allowing them to get away and either continue dribbling, pass to a teammate, or make a shot on goal. When approa

ching the opposing player, the player with the ball will use the outside of either foot to kick the ball to the side. It is extremely important that the soccer player performing the cut knows exactly how hard to kick the ball. A side kick that is too soft makes it easy for the opposing player to take possession of the ball, while a side kick that is too hard can cause the player to lose control and possibly turn it over to the other team as well.

The Fake Kick Skill is one of the most successfully used soccer skills. This skill is performed when a soccer player is dribbling the ball close enough to the goal and acting as if they are about to take a shot, causing the defender or goalie to try

blocking it. When a defender goes to block the shot that was never actually taken, this allows the player with the ball a short amount of time to dribble around them and shoot or pass to a more available player. 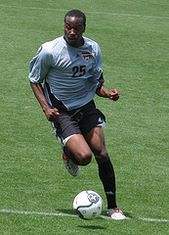 When this skill is used on the goalie, it can lure them to try blocking the ball in the area they thought it was being kicked and leave other areas of the goal wide open.

The Scissors Skill is performed when a soccer player moves one foot quickly around the front of the ball, while the other foot follows in the same manner but in the opposite motion. After crossing both feet around the front of the ball, the player will use the outside of either foot to cut the ball and continue dribbling around the defender. This is a dribbling skill that is used to confuse the defender and prevent them from determining which direction the player with the ball will be going in to get around them.

When a soccer player faces a defender, they will often use their body for directional misleading. The player with the ball wants the defender to think they are going in one direction, when really they plan to go in the exact opposite direction. This dribbling skill is performed when a soccer player will jump to a side of the ball while using their shoulder and body to push their leading foot, then immediately step and go with the other foot in the opposite direction. When the defender is thrown off, the soccer player is able to continue dribbling the ball.