After wrestlers learn the proper technique and form for their stance they will learn the wrestling takedown. There are a huge variety of styles and types of takedowns in wrestling that are put in combination moves. Styles of wrestling takedowns generally focus on what part of the body a wrestler is going after on their opponent. For instance, a wrestler will use the penetration step when they are focusing on the lower portion of their opponent’s leg for control. 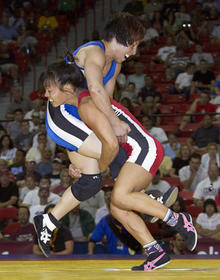 Other styles of low-level takedowns include the following: